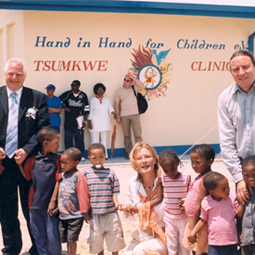 Surrounding the village Tsumkwe in the north of Namibia 5.000 – 7.000 people are living who are members of the San tribe. The population lives in poor circumstances because the supply of water and food is insufficient for living. Under these circumstances a minor disease often leads to death.

Before Hand in Hand for Africa committed itself for a hospital the medical care of the patients took place in a shack which did not meet any hygienic standards. Refrigerators for the maintenance of medicine were missing and a spatial separation of the patients was not possible so that pregnant women often had to be treated close to patients suffering from tuberculosis. 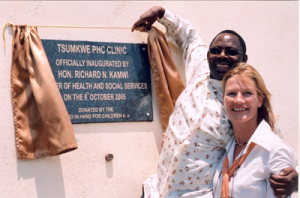 After a construction period of 6 months we could already inaugurate the first own hospital in October 2005 in the presence of the Namibian Minister of Health Richard Kamwi, patron Suzanne von Borsody and the people of the Tsumkwe region.

Nowadays between 35-40 people requiring medical treatment arrive at the hospital each day and make use of the nursing staff’s help. 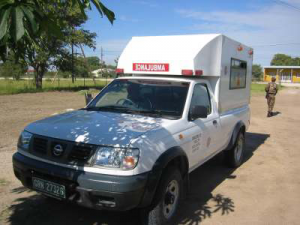 The hospital ward also owns an ambulance so the patients do not need to walk long marches through the desert. Our association provided bicycles to the village so that the villagers can ride to the clinic in case of an emergency and order the ambulance for the injured. This is the only possibility for the residents to call for help because any mobile networks or telephone mainlines are not available.