The history of the San

Some ethnic groups in Southern Africa are named “San”. This populace is presumed to be the root of our genealogical tree and represents this very day the life of mankind about 20.000 years ago.

Many bushmen who fed themselves from nature and traded with their neighbors every now and then could not change over to modern economy procedures. Over the centuries they lost their livelihood and their pride and their identity was stolen.

The bushmen in this day and age suffer from tuberculosis, Aids, alcoholism and unemployment. They cannot hunt anymore and are surrounded by dry soil and, therefore, suffer from hunger. Unfortunately, the public recognizes the San’s fate too slowly so that the San and their traditional way of life are abandoned to their fate.

Live of the San

Today about 100.000 San live in Southern Africa, about 38.000 therefrom in Namibia. The better part of these people works on farms and only a few live in their traditional way. The San apply other social rules than we do. They organize themselves without any superior political management system. Any infringement of an ethical rule is at worst punished by an expulsion from the community.

The San live in small mobile groups who are formed by family relationships and also by individual preferences of the San. Within the group issues such as hunting or relocation are decided jointly. Particular occupational groups of the San are not known, their work, however, is differentiated according to gender. Big game hunting e.g. is performed only by men.

Hunting is the principal food source and a regular ritual for the San. During one year the San cover a distance up to 4.000 km on hunting grounds. During this period they only eat very little food and subsist on ostrich eggs filled with water and pieces of hoodia.

For hunting they use darts and bows and arrows. Fast hoofed animals are often slain in endurance hunting. For this purpose the hunters do not use weapons but run behind these animals until these collapse enfeebledly.

The San women also have a considerable share in feeding by collecting nuts, roots and berries for nutrition. The bag is shared within the community and not traded. Within and outside of the own group goods such as spears, leather or ostrich eggs are distributed as gifts. 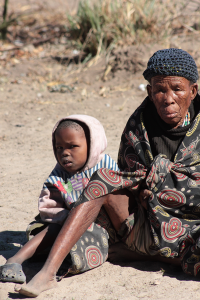 If the San have a baby this is done normally outside the hut settlement. After return to the settlement the newborn is received in the community. The San’s normal birth intervals are four years because the women breast-feed 3 to 4 years and only get a lean nutrition so that a new conception is not possible.

A girl is considered as adult and nubile woman when her menstruation begins which is at an average age of 16,5 years for the San.

San are a populace very close to nature and know the plants and their surroundings very well. For this reason herbal remedies are used frequently.

Their religion is animist, they consult oracles and believe in morbid spirits and healing by trance dances. San with spiritual abilities are instated as mental healers.

The klick and flick sounds of the Khoisan-languages (bushmen and Hottentots) were introduced partly in the Bantu-languages Xhosa and Zulu. No culture is probably as good in storytelling as the bushmen. They are excellent imitators of animals as to facial expression and gesture.