We rise with the sun and wait that the current functions again. This is the only means to operate the water pump. A bit of water to the face, brush teeth with mineral water, that’s it. 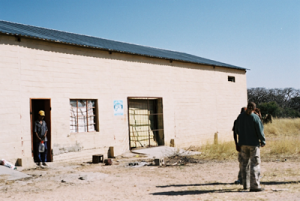 We have a great deal to do today: take a look at Mangetti and journey on to Tsumkwe at noon. After handing out some toys as e.g. footballs, skipping ropes and toy cars, to the children we visit the doctor at Mangetti hospital. A lot of people are already waiting in front of the hospital. Most of them are enfeebled from TB or HI-infection, among them a lot of children. A woman lies in the shadow of a tree, she looks miserable. Nobody takes care of her but for the two hospital nurses, other people walk by without paying any attention. 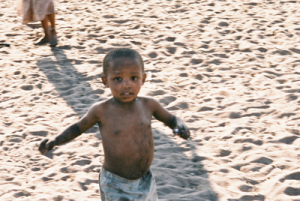 It is “Doctor’s” consultation hour. She will attend to all of her patients this day knowing that most of them are beyond help. The one thing that remains to be done is to make it bearable. The hospital has seen better days before but it is very clean and serves its purpose. The adjacent TB-center is completed, the walls are freshly painted, but it is not run yet because money for the appliances is missing. But it will start soon “doctor” tells us and she always keeps her word. 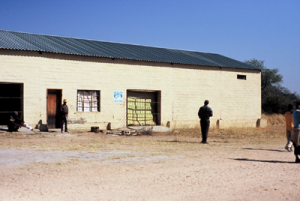 The orphanage is well-kept. The walls are whitewashed, the rooms are neat, one bedroom for the little boys (5) and one for the girls (3). We bring some children clothing and their joy is great. We also replace some light bulbs because these are mounted too high for the “small” nurses. Although the children have a moderate home they have got everything they need. A lot of people at Mangetti are cold during the night because there are minus temperatures during the night at winter. We want to take a spin around the village because of a proposed project for which we shall become active in future.

The village looks wretched. How could it be different because Mangetti is a military base left by the Namibian Army.  Rank growth above cracked concrete ways, underused drill grounds covered by dust, gravel roads and utility buildings in a bad state, some of them tumbled down. Some are inhabited by humans, some by animals. In between there are some kraal buildings of the San because many of them prefer to live in their traditional straw huts. It seems logical that these do not have electricity or sanitation. 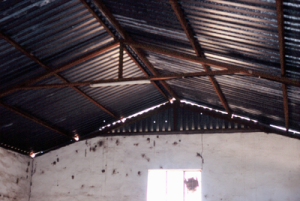 Sleazy teenagers smoke hand-rolled cigarettes. They use, however, filthy newsprint as cover sheet and a non-descript mix of wood and herbs as filling. One recognizes at once that these foul-smelling things make you sick. They sit around in small groups and have not got anything besides this “luxury”. They do not do anything. What should they do? There isn’t any work at Mangetti, any diversion, any entertainment. Each day the same idleness and waiting for the evening. Young people who wait to get older without knowing for what and why.

A former warehouse is shown to us. It seems to be in good shape. The roof seems to be nearly new, the premises seem to be used partly. It is desired to open a bakery, the first at Mangetti. An oven would be available, the other simple technical equipment, too. These gems are shown to us proudly. Every German antiquarian would get teary-eyed looking at this equipment. You would never get a concession for this in Germany, but here it is sufficient to establish a living. The remaining parts of the building are shown to us. It is intended to plant a vegetable garden on the big plot behind the house. The harvested vegetables will be sold in a small shop just as the baked bread. This shop shall be installed in the big building, too. So far there is only one small kiosk at Mangetti which is run by strangers and the prices are extremely overcharged for the San. Nobody can afford to buy anything there. For this reason they want to produce something on their own and trade.

In addition, a small soup kitchen for the children and the elderly is required. It is wished to house with our help a small facility there where a hot meal can be supplied to 50 people each day. The little ones and the weak old people often suffer from deficiency syndromes due to malnutrition.

An ambitious project which should be supported. Help for self-help. By persons from Mangetti for the people living there, by locals. We promised directly the provision of the equipment, of material for the fencing of the plot, the seeds and the tools. We will deliberate on any further support during the next days.

At noon we continue our journey to Tsumkwe.

We arrive at Tsumkwe around noon. The road leading there is a gravel road but we reach our destination safely and promptly. We like to visit the Hand in Hand for Children – children’s clinic which we could open a few months ago. 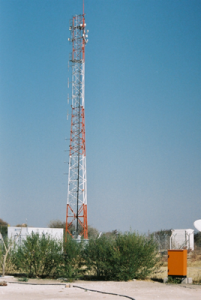 We are surprised when we reach the village boundary. A tarred road? Roadmen with heavy equipment? Two new buildings, even from stone? What’s the matter here? We drive on unbelievingly to the village center. And even see a huge transmission tower! Transmission tower? Really, but is there any mains receiver for mobiles? This would be something really new, because we packed specially a satellite telephone. We switch on our mobiles. Behold, we have got network connection, at least for a radius of a few kilometers around the small village! Now civilization in terms of technology and communication finds its way to the land of the bushmen. We do not know whether to be happy or sad. Now then, there it is, the progress.

As we drive up at the hospital we are pleased about the hospital’s visual appearance, everything is very neat. We are greeted by Wilhelmina, the enchanting head of ward who takes care of the people from the bushland and the small hospital with a great deal of dedication. Wilhelmina herself is a San, one of the few who attended a school at Windhoek and later trained as nurse. Of course she would have got an employment with better salary at any time in the capital and a nice apartment in the center of Windhoek! But no, when she left back then she promised that she would return and commit herself for her people, the San. And she kept her word and takes care of the elderly, the sick and above all of the children who come for her with different diseases. 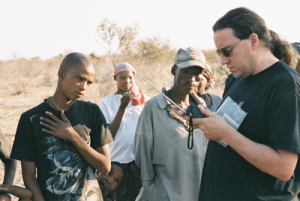 The Hand in Hand for Children-hospital is a fixed point of contact for hundreds of San from the ample region. Many San-villages are more than 80 kilometers away, so the people had to walk this distance in case of an emergency until last year. Many sick or injured people died on this incredibly long distance. For this reason the association bought an ambulance and some bicycles for these people. You ask yourself, why bicycles? Quite simple. In case of an emergency a relative or villager can ride the bicycle to the clinic and request the ambulance there. To this day mobiles do not work within the bush and there are not any regular telephone connections available in the kraal villages. Now the ambulance can pick up the patient and bring him to the hospital for an emergency treatment. The San make often use of this offer and by this we could certainly save some human lives.

The improvement of the San’s living conditions is close to our hearts. Especially the children who grow up here should get a perspective for their lives. This includes first of all health and education. Both are linked inseparably and are an imperative. For this reason we brought 30 solar radios to the various San-villages. Solar radios which can be energized by sunlight or alternatively by a crank dynamo. In future important information in their own language can be supplied to the San via these radios. As most San speak only their own dialect which is composed of different “click-sounds” the radio program must be arranged and spoken by countrymen. 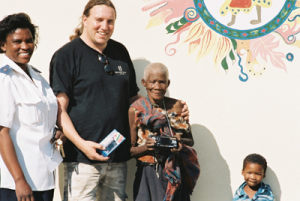 As of now fellow countrymen will provide 15 hours of program to the San. By these special NBC radio transmissions broadcasted from a small studio at Tsumkwe people are informed about vaccination hours at the Hand in Hand for Children-hospital and about the risks of HIV, TB, cancer or malaria. They will receive a weather forecast and will be informed about political changes with regard to their living conditions as well as sex education. Approaching dangers such as bush fires, scattering of considerable amounts of pesticides for disinfestation in the bushland or similar issues will be announced in the radio.

Many San held a radio in hand for the first time and we were pleased to see how the young people in particular accepted this technology positively. Distributing these radios is a small step towards information society by which the San can be informed about their possibilities and rights and which improves their situation in the long run.

The solar radios were provided free of charge by the courtesy of Electronic-Conrad, the famous dispatcher of electronics in Germany. We would like to thank very much again! 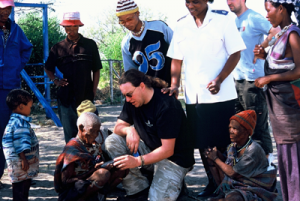 After we introduced ourselves to the production director of San-Radio (NBC) and told him that we will distribute the 30 radios to the various villages he was very pleased. He offered to support our work wherever possible. Therefore we asked that the possibility is given to Dr. Melitta Bosshart and Wilhelmina so that they can report on their consultation hours and trips to the different regions in advance. Both ladies will also have their say with regard to medical education and prevention. We like to thank NBC that they offered unconventionally such an important cooperation for the well-being of the people.

We leave Tsumkwe in the late afternoon with good feelings that something will make progress, although in small steps.