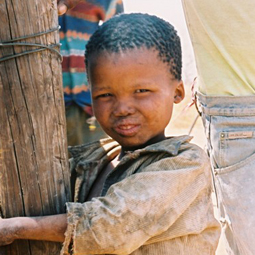 05:00 h in the morning. We prepare for the departure to the North of Namibia.

We head for Tsumkwe and Mangetti, the San land. The San are an endangered primitive populace suffering from serious implications such as alcoholism, tuberculosis or Aids after the entry of the so-called civilization.

These people were crowded out of their original ways of life and cannot feed themselves on hunting alone. They fell into oblivion with all their problems because the San live in remote regions, their small kraal villages are widespread and telecommunication was possible only with satellite telephones until a few months ago. As of late the government also takes care of their fate.

At sunrise we board our jeep, there are 850 kilometers of streets, sand roads and gravel roads in front of us. We pack tents, sufficient water and rations of food. The road is exhausting and the last 200 kilometers are even dangerous. We head for the aboriginal bush. Wild animals, snakes and no possibility to call for help if anything happens. The tautness is high, but the anticipation for the Hand in Hand for Children hospital in Tsumkwe is more significant.

Prior to this we want to stop by at Mangetti and visit our friend Dr. Melitta Bosshart (affectionately called “doctor”) and her 8 orphans.

At sunset and after 9 hour drive we arrive at Mangetti and are actually dead tired. What we perceive first of all when arriving at Melitta Bosshart’s home is the cheerful laughter of children. We are welcomed by the children and engrossed directly, of course for playing and cuddling. So our tiredness evaporates abruptly.

I experienced rarely such affectionate and sincere children. They all exude something good, it was a real joy. It is

hardly imaginable that all these children are orphans, some of them infected with HIV, some with tuberculosis. It must be due to Dr. Melitta Bosshart that these children are as lovely as they appear to us. For these boys and girls between two and fourteen years she is mother, teacher, friend, but in equal measure father and unchallenged person of authority. Love and respect are the basis for the functioning of this little family.

For 17 years Dr. Bosshart has been living in the bushmanland which is about half the size of Switzerland. Melissa Bosshart comes from the area surrounding Geneva and lives there in a simple house away from our civilization. Doctor is the only European within a far radius. She works for the Namibian Ministry of Health and is responsible for the hospital at Mangetti and for the clinics at Gam, Tsumkwe and Omatako. As a whole she takes care of 60 San villages, an inconceivable amount of work because she has to cover a distance of hundreds of kilometers for her house calls. An important factor of Dr. Bosshart’s work is prophylaxis by health education. She gives also attention to naturopathy and adopts old San knowledge.

The most important health problem in the region is tuberculosis. Fighting it is intensified by means of a special TB-team who examines regularly the patients in the villages. With donations from friends, family members and visitors the small orphanage for “her” children, a kindergarten and a TB-station could be built. Our “doctor” achieved something magnificent! In Germany it is discussed exhaustively how a working woman is enabled to child-rearing. I would like to make the proposal: Go to Mangetti and visit this amazing woman. You will never raise this question again.

We are welcomed by “doctor” like old friends and after dinner – which must be ready at 20.00 h because afterwards the current generator at Mangetti is turned off for the night – we talk for a long time on the situation in her hospitals and the children.

A girl attracted my attention. She had wonderful big, but very sad eyes. She was the only child who kept away shyly and almost anxiously from us. I asked “doctor” what was the matter with this girl and the answer shocked me to the core. “Doctor” informed that she was 12 years old, abducted from her home village in December last year and displaced. She was raped and is HIV-positive since that time. When the parents found out that her daughter was not a virgin anymore and now even sick she was cast out. Such a hardship leaves you dumbfounded. It is sheer lunacy that people follow the old rites of their populace due to lack of education and believe erroneously that all diseases are removed when they sleep with a virgin. This lunacy destroyed the girl’s life forever, physically but also mentally. Dr. Melitta Bosshart did not hesitate a second to take care of this child. Thank God!

During this night we fell silent very often!